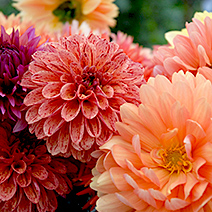 The Dahlias You Deserve 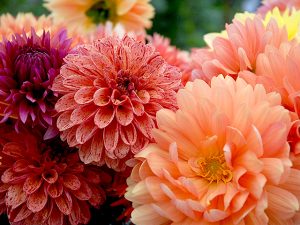 Admit it. You dream about dahlias. Every year, someone else brings a big fat bouquet of dahlias into the office, and every year you wish those dahlias were part of your backyard. Well, listen up, because we are going to bring those fantasy flowers into your reality. Not only are you going to finally get the dahlias you deserve, but you are going to beat your neighbor to achieve a dahlia display before their tubers are even thinking about budding up. 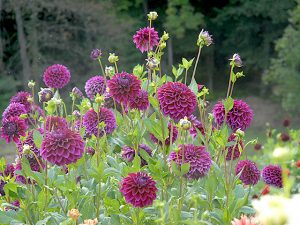 To achieve enviable dahlias, you need to grow tubers year after year. Dahlia tubers are not hardy. But even if you live in the icy, snow-buried Northeast Kingdom, you can store dahlias indoors in a dark, cool, dry basement and replant those tubers in late winter. Every year, your tubers will gain girth resulting in outlandish, outrageous, incredibly swell plants that will wow the world. That’s the edge you gain from storing tubers. All you need to achieve that deed is to dig your dahlias in autumn, tuck them into paper bags and wait until the end of winter. 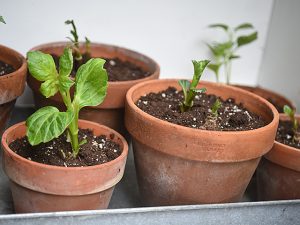 The Fast Track to Next Year’s Display

Most folks bring their dahlia tubers out of storage when nighttime temperatures are safely above freezing in spring when they plant them directly in a pot or in the ground. But by that time, the tubers tend to be seriously, sadly whizzled and they need weeks to recover and regrow. Instead, try starting your dahlias indoors in March. That’s right: Pot those babies up in late winter. They don’t need to go into their ultimate containers. Just tuck them into a container filled with enough potting soil to bring the tubers back to life. Coast of Maine Bar Harbor Blend Organic & Natural Potting Soil is perfect for the job.

We know what you’re thinking: Where am I going to grow dahlias indoors? The answer: You can stash them just about anywhere. Just set them side-by-side on a cookie sheet with a rim or in a galvanized pan that won’t leak when you water. The recovery period will take weeks, so there’s no need to give them good light. The tubers will just be sitting in the soil, thinking about plumping up. But still, they’ll be way ahead of your neighbor’s tubers still hanging out in the bag in their basement. You are going to have a major head start. Plus, your tubers are more likely to survive dormancy with a shorter slumber period.

Wake up Those Dahlias

While they are slowly coming to life again, water them lightly and let the soil go slightly dry between drinks. Coast of Maine potting soil is perfect for accomplishing this feat—it holds just the right ratio of slight moisture. You don’t want to cause the roots to rot. Keep an eye on progress and watch for the telltale signs of life. As the dahlias begin to send up shoots, water more frequently. If you can provide more light at that point, they’ll love you. But even if you can’t furnish precious window space, you can chop back leggy growth later on. What you’re really accomplishing now is just ensuring that your bulbs survive as well as giving them a slight running start. Plus, it’s fun. 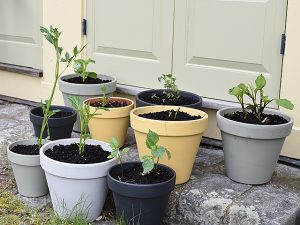 Come spring, you could plant those dahlias directly in the ground when danger of frost is a thing of the past. But rodent issues (voles = I mean you) are a headache for some of us. A safer alternative is to keep your dahlias in containers. Terra cotta pots will protect those plump juicy tubers so you can enjoy dahlias into the future. And they’ll look so much snazzier than plastic. Here’s an idea: Buy inexpensive containers but paint that terra cotta to match your house or just to be creative. This could look really good. This could bring your display to another level. 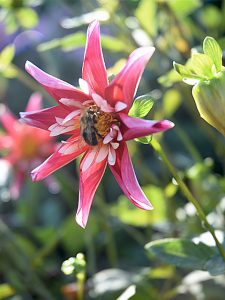 Dahlias dote on large containers. When a dahlia has developed a network of tubers, you want to go with a 12-inch pot or larger. To give your dahlias the breakfast of champions that they crave, transplant them into a container filled with Coast of Maine Stonington Blend Organic & Natural Grower’s Mix, giving them the chow, they need to pump out their pompom flowers until frost. Not only will you be the envy of everyone near and far, but pollinators go bonkers for dahlias, especially the single-flowering types. You are going to make their day over and over again. And you’ll be the one bringing bouquets of blossoms into the office at last. Sometimes, dreams come true.

Kids Can Garden Too!

This website uses cookies to improve your experience while you navigate through the website. Out of these, the cookies that are categorized as necessary are stored on your browser as they are essential for the working of basic functionalities of the website. We also use third-party cookies that help us analyze and understand how you use this website. These cookies will be stored in your browser only with your consent. You also have the option to opt-out of these cookies. But opting out of some of these cookies may affect your browsing experience.
Necessary Always Enabled
Necessary cookies are absolutely essential for the website to function properly. These cookies ensure basic functionalities and security features of the website, anonymously.
Functional
Functional cookies help to perform certain functionalities like sharing the content of the website on social media platforms, collect feedbacks, and other third-party features.
Performance
Performance cookies are used to understand and analyze the key performance indexes of the website which helps in delivering a better user experience for the visitors.
Analytics
Analytical cookies are used to understand how visitors interact with the website. These cookies help provide information on metrics the number of visitors, bounce rate, traffic source, etc.
Advertisement
Advertisement cookies are used to provide visitors with relevant ads and marketing campaigns. These cookies track visitors across websites and collect information to provide customized ads.
Others
Other uncategorized cookies are those that are being analyzed and have not been classified into a category as yet.
SAVE & ACCEPT
Powered by