August in the Garden

August in the Garden

At least a dozen times a week lately, the word “process” is spoken in our house. With this heat wave, the veggies are coming in fast & furious so that means processing what we can’t eat now so we that have organic produce for later in the year. Unfortunately, both methods of processing require boiling water and lots of it! So when it’s 90 and humid outside, it’s even hotter and more humid in the kitchen. Complaining aside, it is all very… worth it 🙂

The first method we use is to prep the veggies for freezing by immersing them in boiling water for a specific amount of time. This is called blanching and is necessary when you plan to freeze most vegetables. Blanching stops all of the enzyme growth which can cause loss of flavor, color and texture. The second part of this process is to submerge the produce into an ice water bath which chills the vegetables so that they will no longer be cooking. Blanching also removes any remaining soil or insects from the produce, brightens the color and helps lessen the loss of vitamins. It also softens vegetables making it easier to pack them into containers or freezer bags.

So here’s a step by step:

1. Wash the vegetables, peel if needed (carrots, beets) and then cut them into same size pieces. Some won’t need to be cut (edamamme pods, lima beans, pea pods).

2. Choose a pot that will accommodate 1 gallon of water and 1 pound of vegetables. Always blanch the vegetables in small batches like this so that the correct amount of cooking heat is realized. Add about a teaspoon of salt for every gallon of water. The salt helps the vegetables maintain their color and it also keeps them from getting too mushy. Cover the pot and bring the water to a boil.

3. Put the vegetables in a steamer basket and lower it into the boiling water. Do not cover the pot. This will cause boil-over’s and also trap some of the acids released by the vegetables during cooking which will cause the vegetables to become limp and deteriorate in color. When the water returns to a full boil, set the timer. Most vegetables require 3 minutes of cooking but to be sure, a good chart for recommended times can be found at this site….. https://nchfp.uga.edu/how/freeze/blanching.html

4. While waiting for the cooking process to finish, fill a large bowl with cold water and add a good amount of ice to it. I use 1/2 ice and 1/2 water. When the timer goes off, remove the basket with vegetables from the pan and pour the vegetables into the ice water bath. Let them sit for the same amount of time they were cooked for. Remove any remaining ice cubes, drain the vegetables well and lay them out on a clean towel to absorb moisture before immediately packing them into freezer containers / bags. 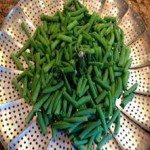 On a side note, you can also steam vegetables instead of boiling them but it takes about 1½ times longer than water blanching and believe you me, the less time I have to spend in a hot kitchen the better! Also, with steaming you lose the added opportunity and benefit of adding salt to the water. Using a microwave to process vegetables can also be done but research has shown that it may not be as effective at stopping the enzymatic deterioration which causes loss of flavor, color and texture.

On a second side note, for those of you who don’t have your own garden plot…there are options 🙂 Many garden centers sell produce, local farmers markets are becoming more widespread, roadside farm stands are in full swing now and CSA’s (community supported agriculture) are becoming more and more popular. Don’t miss out on an opportunity to support local and eat healthy at the same time!!

Sooo, at the beginning of this blog I said that we use 2 methods of processing to preserve the fruits of our labor. Stayed tuned to find out what the 2nd method is!

IDEAS FOR YOUR 2020 VEGETABLE GARDEN